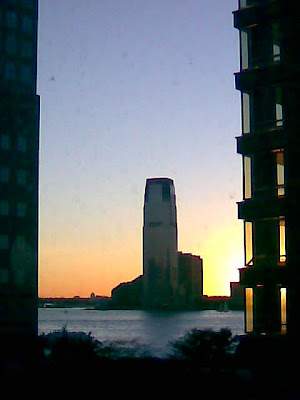 I have the same picture over at my other place. I wanted to share how absolutely beautiful Manhatten was at sunrise.
Posted by Deb at 4:56 PM No comments:

Hey! Between the bus eating my children, the truck playing hide and seek in the parking lot, and that hectic first day of school, I’ve thrown my hat in the ring and participated in this:

You would have my undying gratitude and my first born child (no…you’d just bring him back after an hour)if you voted for me. Thanks! I’ll go into more detail about the bus and the parking lot later.

You're purrfect just the way you are!

Maddening person that I am, I'm keeping this site to post pictures, and the other place to post journal entries.

Oops. I forgot to post the direct link to my column. Here tis'.

Good morning everyone! If you want a grin, or even a giggle, check out my monthly humorous column at Sanity Central. For a gut-busting belly laugh, indulge yourself by taking a gander at the other wonderfully written stories.
Posted by Deb at 10:13 AM No comments: 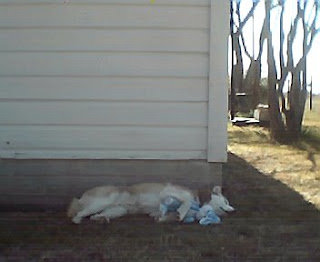 When the cat's away, the mouse. . .well. . .this mouse at least, throws herself a pity party the likes of which no one has ever seen. You'd think that after fifteen years of marriage, I'd be used to it when John leaves town for a conference; that my heart wouldn't be ripped to shreds as I stand in the front door, watching him drive away. But it was.

And so, while dear hubby was away last week, I found other ways to amuse myself. I found this link on chelle's site, and entered the Mom Idol singing contest. If you feel brave, and would like to be tortured, please feel free to check out the song I sang. Blogger will not work the way want it to, so here's the link:

I found this meme over at Much More Than A Mom's.

Five Facts About Me

1. When I was fours old, I thought I might have the power to resurrect dead animals. Our cattle dogs would bring wild rabbits they had just killed into the front yard. An animal lover at an early age, I risked life and limb by wrestling the prey away from the hungry dogs. Shedding tears of sorrow over the bunny carcass, I tied one end of a rope to the animal's neck, the other end to my tricycle, got on, and rode up and down the drive, as hard as my chubby legs could pedal, dragging the corpse behind me in the dust. I believed that if I went fast enough, the rabbit would come to life. Mom looked out the kitchen window and saw what I was doing. She screamed, told my dad to make me stop, and well. . .that ended my bunny "lifesaving career." And you thought Stephen King was weird.

2. I might have said this one before, but I brought one of my horses into my mother's house. Several months after Daddy was killed, Mom decided to have the re-modeling of the house completed, so she hired some workers to complete what my dad started. On day, when I was leading a four month old filly past the house, a worker remarked that the horse was very well-trained to the halter, but he bet me that I couldn't get the filly inside the house.

Wordlessly, I led the horse across the porch, through the front door, where she patiently trip-trapped behind me on the particle board to the kitchen. Mom, who was at the sink, told me--as if it was an every day affair--to get the horse out of the house. The worker, redfaced, stuttered as we walked out, said, "I-I didn't think you'd take me literally."

"Don't ever dare me to do anything," was my icy reply.

3. I used to eat Mircle Whip sandwiches when I was little.

4. I stood on the sidelines during an NFL pre-season scrimmage, and got to put a Superbowl ring on my finger. This occurred the very last summer the Dallas Cowboys had their training camp in Austin. I was field security, which meant I had direct contact with the players and special guests. One afternoon, when practice was over, I was introduced to an ex-Cowboy; one who'd played with Dallas the first time they went to the Superbowl.

I'd told him I'd been a fan since I was small, that "Go Cowboys," were among my first words spoken, and how my dream had been to play for them. Laughing, the gentlemen took his Superbowl ring off his finger, placed it in my palm, and said, 'Here sweetheart, wanna try this on?"

My heart pounded in my chest as I gazed at the piece of jewelry. "Go ahead, put it on," the ex-player urged. "You're not gonna hurt it. That thing has been dropped so many times it ain't even funny."

My hands shaking, I tried it on each finger. On each digit, the ring looked like a donut on a stick, until I tried my thumb; it fit then, but barely.

A few days later, I found myself on the sidelines, thousands of people screaming and cheering as the Dallas Cowboys scrimmaged the Oakland Raiders. It was a magical summer, a summer in which dreams came true.

Having a preschooler again is definitely having an affect on me. We watch Barney—I think we have every DVD—several times a day. I can’t stand that prehistoric creature, but still I find myself pausing in the housework, glued to television so I can see what Barney does next. I know all the lyrics to the Barney songs, and the CD case in my truck—which once boasted the soulful sounds of Luther Vandross or Pink—is now overflowing with titles that include Toddler Tunes and Just 4 Kids.

Can you imagine what it’s like, on a warm spring day, to have the windows in your truck rolled down, and stop beside a bass-thumping car at the red light (who also has their windows down). Not to be outdone, you reach into your CD case, and not looking at the disc selected, pop it into the player. Soon, you’re jamming to the sound of Hickory Dickory Dock or Old McDonald. The sound of laughter reaches your ears as the light turns green and the other car races away, leaving you behind in a cloud of dust and embarrassment. It’s happened to me before, and I must say it’s not a good feeling.

I even count money differently. The other day I was in the checkout line at the store. When it came time to give the cashier my money, grabbing her hand I pressed the coins individually into it and said, “That’s a quarter. . .twenty-five. . .and one more quarter makes fifty—“ I saw the shock in her eyes, and luckily was able to stop myself. Of all days, Robert chose that one to stay at home with his dad.

“Haha. . .I have a preschooler at home,” I said, my face reddening.

“Uh-huh,” the cashier replied, jamming the receipt in my hand, obviously glad that this crazy woman was leaving her line.

I need help; either Robert has a bigger impact on me than I thought, or I’m already regressing into my second childhood. Either way, I’m a mess.


All your comments had me in stitches; you all are hilarious! Thanks for the welcome to Crazyville, I'm glad to be part of the whole wonderful bunch. Since I am a member of the "bunch," does that make me a "Grape-nut" (as in the cereal)?

This past Monday, I received an email from Chicken Soup saying that a story I submitted was under consideration. Nothing is final, there's still a chance it might be rejected; but like last time, they sent a contract for me to sign. Instead of celebrating like I wanted to--a latte and a candlelight soak in the tub--I spent that afternoon and the next two days caring for a flu-stricken husband. Bless him, I've isolated him from all form of life--even the dog--and chased after him with a can of Lysol, spraying everything he comes in contact with.

"Why don't you hire a tanker truck filled with rubbing alcohol and spray down the entire house with that?" John said irritably as I steamed cleaned his favorite spot on the couch today.

"Hey, if you think it'll help--" I replied with fake innocence.

He walked away, shaking his head and mumbling something about "no justice for the ill." Oh well, I may be over-reacting, but his bug is not something I care for the family to share with him.

Deb
I grew up in the Blackland Prairie region of Texas, where miles of grassland and my horse were my best friends. Married for over twenty years, I now reside in the Texas Hill Country with my husband John, and two children, Jonathan (my older son) and Joseph, who has autism. My stories have been published in newspapers, magazines, and in several of the Chicken Soup for the Soul books. Amelia Frump and her Peanut Butter Loving Imagination, my first children's book, is published by Dancing With Bear Publishing.

The Time of My Life